As was pointed out to me by Bubba from the Joffrey of Podcasts – I completely forgot to include one very import poll – here it is.

Matt will be putting together a special News/feedback/Awards special for S4 and encourages you to participate in any way you wish.

For instance you can vote in the Winterfell Awards here and Matt will announce the winners in the podcast.

Or you can submit TV only (NBRs) or Book friendly (BRs) feedback via e-mail (podcastwinterfell@gmail.com) or by calling 314-669-1840 about anything Season 4 related.

Matt is dividing the podcast up into a TV only (NBR) section and book section (BR) so that everyone can get in their thoughts without worry.

If you would like to have your thoughts shared on the podcast please submit them before July 13th, 2014 at midnight (midnight wherever you are in the world) and it will be included.

The podcast will be released on July 17th for your listening pleasure. Thanks in advance for participating!

The following email was submitted to the podcast (and others) with information about Braavos (where Stannis and Davos visited). Enjoy this wealth of spoiler free information and thanks to Harrel for the effort.

I am anticipating confusion about the upcoming appearance of the city of Braavos in the series, so just to help with this:

1) I would point out that Braavos is modeled on the Italian city of Venice and the medieval Republic of Venice, which was in existence for over a thousand years, from 697 to 1797.

2) I’m attaching a map of Braavos and a map showing wear Braavos fits in the world of ASOIF.

3) Below, I’m placing a link to an excellent spoiler free site that provides historical background for non-book readers. I’ve gone ahead and pasted an edited version of its excerpt on Braavos beneath the link. Hope you find this useful!

Braavos is the only Free City to not be a Valyrian colony. It sits on a lagoon in the northwestern end of Essos, at the junction of the Narrow Sea (between Westeros and Essos) and the Shivering Sea (above Essos). Braavos also claims the coastline to the southwest. The ruler of Braavos is known as the Sealord. Braavos has one of the largest ports in the world.

Braavos was founded by slaves fleeing Valyrian expansion. They were led by the Moonsingers, who wished to hide in the lagoon to keep away from the dragons. For centuries, it was a secret city and remained relatively unknown to the rest of the world. After the Doom of Valyria, it was publicly revealed, roughly 400 years after its founding. The city is sometimes known as the Bastard Son of Valyria.

The culture of Braavos is centered around sea trade. Braavosi ships paint their hulls purple, and their ships trade with all corners of the world. The Iron Bank of Braavos is one of the major moneylenders of Braavos.

The city is also known worldwide for its courtesans. Each courtesan has their own barge and servants. Their beauties inspire songs, and they are showered by gifts. Nobility and rich merchants pay for courtesans to be their dates at events.

The symbol of Braavos is the Titan, which is both a fortress and an immense statue which sits over the entrance to the Braavos port. The only notable Braavosi in the show so far is Syrio Forel, the First Sword of Braavos for a time.

Braavos is also the location of the Faceless Men (we’ve met Jaqen H’ghar), a group of assassins who change their faces. 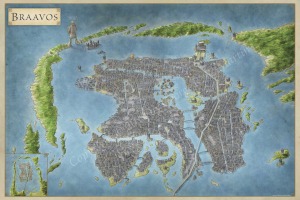 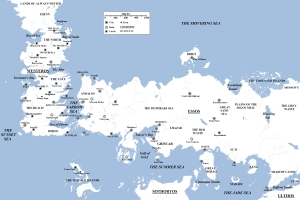 Today I received an e-mail from Jimmy which brought up some things about responses to the Jamie/Cersei in S4E03 “Breaker of Chains” scene and subsequent scenes. Because the e-mail is too long to read in the podcast I promised Jimmy that I would publish his e-mail here:

I’m completely exhausted by ignorant peoples thoughts upon the Jaime and Cercei rape scene. This is plain and simple Marital RAPE. But I guess people want to look at the show from their own moral compass and current society views to pass judgement. If this was the case I wouldn’t even watch the damn show.

Character assassination baloney. The show is based on the war of the roses/ renaissance period of our history. And more of the latter for the moral compass of the society of this show. I don’t think people thought one way or the other about marital rape during either of these periods. Considering prosecuting for it has only happened recently in human history. Did we not just see 2-3 episodes where the King Tywin is telling his own son Tyrion to RAPE Sansa and get a baby in her. Which he almost does in the book. One of the very reasons why I like Tyrion so much because he stops right before he does it. I found this very surprising because he might be one of 3 people in this show who would not take what is “rightfully” his. Jaime is not one of them. Jaime who throws little kids out a window wouldn’t think twice about something that NO ONE gets in trouble for doing to their lover in a time period such as this. No matter how good he is turning. What do you think Tywin is telling Tommen about his own marriage?????? If your wife don’t spread em for you then just take it for your own.

Wait Jaime and Cercei aren’t married…Bullshit they have been married sense they left the womb together if that’s your counter argument for me then don’t even read any farther because your completely wrong. And that’s the same time that Cercei started controlling the crap out of Jaime. This is about the only thing he can do ever to get power over his sister. Pathetic.If anything it shows how weak he is when it comes to Cercei and she knows it. Why do you think she was ordering him around this entire last episode. Because Jaime took power over her and now she is putting him back into his rightful place beneath her thumb.

Cercei was raped by King Robert hundreds of times. A man she despised and hated. I think she is pretty numb to it. Now that Jaime has done the same thing she probably thinks the lowest of him, but you have to be shitting me if you think she would let him know that afterwards. No way is she going to admit that he had taken power from her in a way she can’t stop to his face. Especially with a thing that is thought of as perfectly fine for that current society. She is just going to right the balance and make him her little puppet just like the show represents.

Oh wait Jaime is done with her bs. I hope to see more of it maybe he didn’t have his balls cut off too. Which makes perfect sense how she has treated him in the past. Everything about this episode makes sense to what happened in episode three. Cercei would never bring attention to a weakness she despises in herself and has no choice about. Her strong feminist traits and her love for her children are her only redeeming qualities. She sees the world for how women are treated unlike any other female in the show and it pisses her off. Blackwater. Obviously not very many people watching this scene understand; which only proves their ignorance of the struggle of women throughout history and loss of perspective. It was a man’s world and you have no right to your own sexual parts if your a woman. Look at the middle east they are probably the closest to this time period on women rights then any modern free thinking society.

Feminists against this scene is the absolute dumbest hypocrisy I have ever heard of. This is what feminist still fight today for to show how marital rape is completely misunderstood and usually doesn’t get prosecuted. Marital rape is a problem in almost every society currently……….How the hell do you think characters based upon thousands of years ago in English history should live up to the standard of current society. Women were seen as property more than people.

Yes it was RAPE in my eyes but I don’t use my eyes to watch the show. Thats what makes it so fucking great. Princes rape princesses not give them flowers just like in human history.This scene was more realistic to the time then the one in the books and I like it FAR better. It doesn’t change my perspective on Jaime in the least.

If you read this on the air I don’t care edit it up do whatever to express my opinion. I give you full privilege to change anything I’ve said. I know my grammar sucks and I really don’t give a rats ass my perspective is obviously better than 95% of the people that watch the show regardless of their rhetoric.

I will be leaving a review shortly on itunes. I have listened to almost all of the different game of thrones podcasts and your’s is simply the best. Far and Beyond the best. The RED BUBBA can’t wait!!!!! I was thinking about calling into the fan call in show some time. No need to be worried if I do, I first read the series when I was 14 years old (11 years ago) I have been dealing with not giving away spoilers for a long time. And I would never bring up uncomfortable things or cuss like this email because it is just a rant for me about how depressed everyone’s opinion on the subject makes me. I felt safe bringing it up to you because your opinions on the show and book series is one of the opinions I truly respect the most. Keep up the good work and good luck on your music and future podcasts! Even if I don’t call in I will definitely be listening to every episode. It’s easier to change a million minds then just one. Paradox of the masses.

Below is a listing of the recording schedule for the re-watch of Season 1 for those who would like to participate as guests. Recordings will occur at our Talkshoe Fan Call In Page:

If you wish to participate please contact me at podcastwinterfell@gmail.com in advance, and come to each session “armed” with a “3 words” description of the episode, and your choice for Brothelmates of The Week (best coupling of the week). 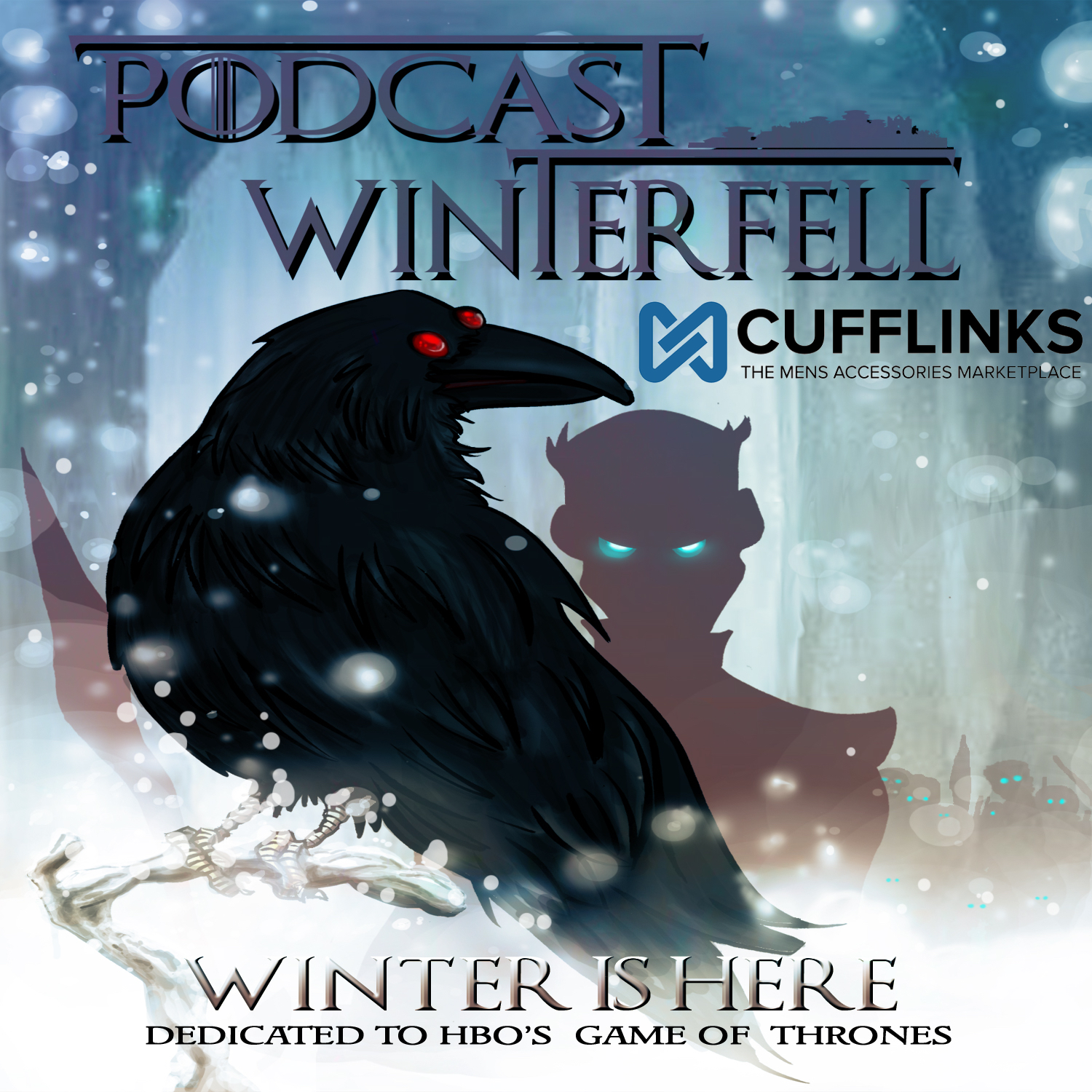